Upon the worn-down peaks of the tallest remaining mountains, are various island chains. Here, the last vestiges of a terrestrial ecosystem have made their home. Gnathotherians, the very last remaining group of mammals, are one prominent group that inhabits some of these islands, though there are only a few remaining genera. Some kinds of marine fish have evolved into land-dwelling small predators, whilst other predatory niches are taken by large flying insects, spiders and land crabs. The vegetation here is formed solely out of C4 photosynthesizing land plants, descendants of sorghum and amaranth, ranging from low scrubby and herbaceous forms, to large somewhat weedy looking trees which can reach 12 meters tall. Their abundant seeds are the fodder for seed-eating descendants of beetles, which can grow as large as mice.
Gnaothotherians are an interesting group, containing the very last mammals to ever exist. Their diversity is relatively low, consisting of 2 genera and only a few species. Not surprisingly, this group evolved from the most originally ubiquitous kind of mammal, the rodents. Though the body-shape of Gnathotheres varies, they are all distinguished by having a large pair or exposed front incisors that function somewhat like a large beak, and give this appearance also. This structure evolved naturally from the hallmark of rodents, the gnawing incisors. Gnaothotheres still give birth to live young which they nurse with milk, but their fecundity varies between species. 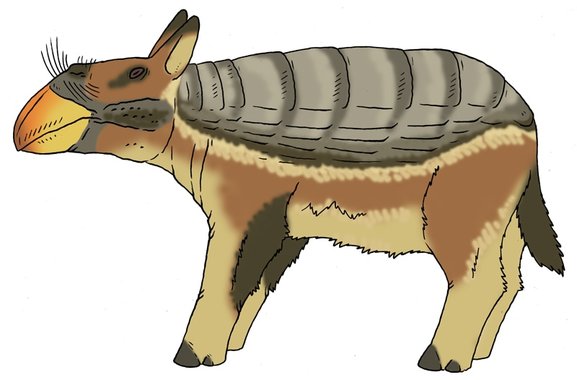 ​The largest subtropical island chain in the northern hemisphere is host to the land dwelling Gnathotheres, called panzershwein (genus Holplochoerus). Pig-shaped creatures, they vary in size between species, from as small as a guinea pig to as large as a capybara. Their backs are covered with a thick carapace of horny plates, which serves partly for defence, but also to protect against harsh solar radiation. Being devoted herbivores, they use their large beak-like incisors to crop the tough island undergrowth, and have a fair sized set of molars to grind and chop food before swallowing. Panzershwein are generally social, living in loose herds of up to 12, presided over by an alpha pair. In the breeding season, each female gives birth to between 4 and 7 kits. 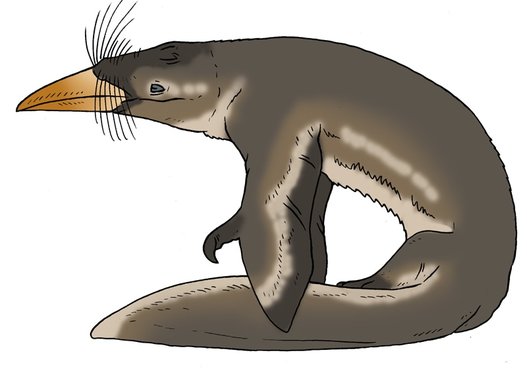 The island chains of the southern hemisphere have many extensive sandy beaches, and found hauled out on these beaches are creatures called sleeks (genus Rhamphotherium). These Gnathotheres are generally similar in mass to a harbor seal, but built somewhat more long and slender, they are this time’s equivalent to sea lions and other pinnipeds. Hunting for food in near-shore waters, they catch marine invertebrates of various kinds with their projecting, beak-like incisors. They swim by sculling their powerful tail, steering and braking with their large flippered forelimbs. In the breeding season, leks form where the most powerful male will sire the most pups. Each female produces a single large, well-developed pup which must be suckled for 2 months before joining its parents in the water.

One equatorial island chain, located over what was once Africa, contains an unusual kind of small predator, the fishepedes (genus Icthyoscolopendra). These crawling creatures resemble nothing on earth today, but in fact evolved from marine kinds of eel, they are the last of the bony fish. The animal’s body has twisted so that one side became its belly, and its fin rays have become muscular insectile pairs of limbs. Possessing large labyrinthine lungs, which evolved from an extension of the gill cavity, they do not need to return to water, and have water-tight skin almost like a reptile. Reaching lengths of up to 30 centimeters, they play a role much similar to lizards, catching small and medium sized insects with their toothy jaws. When they breed, fertilisation is internal, using a penis like organ, and eggs are laid buried in moist soil. 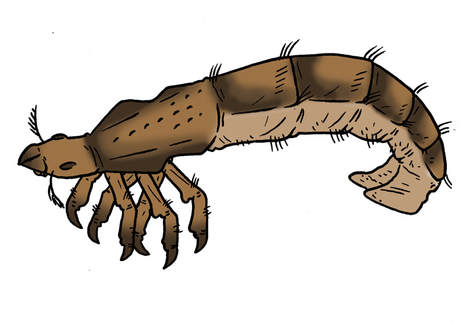 On one particular set of islands, there is a species-complex of neotenous beetle referred to as Gruttles (genus Larvoides). It seems that at some earlier point in time, the ancestor of these insects spread across the islands, having the ability to produce both larviform adults, and flighted, fully formed beetles. However, now most of the species in this genus have lost the ability to produce fully formed adults, and breed in a larvae-like adult form instead. These hardy, omnivorous insects creep and crawl around on the forest floor in great numbers, and are able climbers; they mainly feed on soft stems and leaves, but will also consume carrion, other insects and the droppings of larger animals. The largest species in this genus reaches about 16 centimetres long.

On many of the island chains of Panthalassa Nova, there are ubiquitous land plants descended from sorghum and amaranth, these produce many seeds in the dry season. This bounty are fed upon by insects called seedles, a kind of beetle, which have specialized mobile mouthparts that serve the same purpose as the incisors of a rodent or the bill of a finch, in shelling seeds. Seedles vary in size from as small as a fingernail to as large as a mouse, and they are able to fly from place to place, even between islands, with ease. 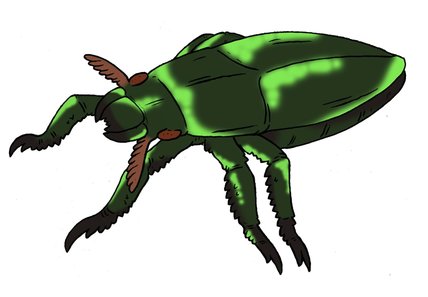 Emerald seedles (Incisivoptera sp) are typical ground dwelling seedless, reaching about 4 centimetres long. They congregate around fallen seeds, which make up the bulk of their diet; they often reach plague proportions during the flowering and seed bearing periods of spring and summer. Forming loose swarms that consist of as many as 50 individuals, when one senses food it will release a pheromone that tells the others to follow it.
​ 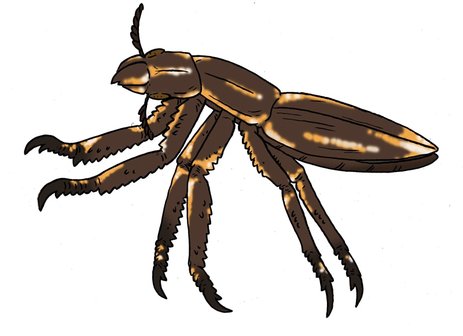 ​Golden tree seedless (Musoptera sp) are large seedless that reach as much as 12 centimetres long. These insects prefer to feed on newly grown seeds while they are still on the branch, and are adapted to climb trees and shrubs in search of food. Most seedless have a hoarding instinct that forces them to bury extra seeds to save for hard times, some of these seed caches end up sprouting and growing new plants, so in this way seedless are important propagators of their food plants.

Hawkers are some of the largest insects found on the planet at this stage, being descended from the predatory robber flies which were common in our time. They serve the role that flying predatory birds once did, many species specialize in snatching marine invertebrates from the waves, much like terns or gulls. Different species vary from only as long as your middle finger, to bird-sized pelagic species with wingspans of up to 60 centimetres. A hallmark of this group is the advanced “pseudo-lungs” formed by labyrinthine internal extensions of the spiracles; here respiration is active, with a bellows like action of the abdomen pushing air in and out. This adaptation has allowed them to reach such impressive sizes. 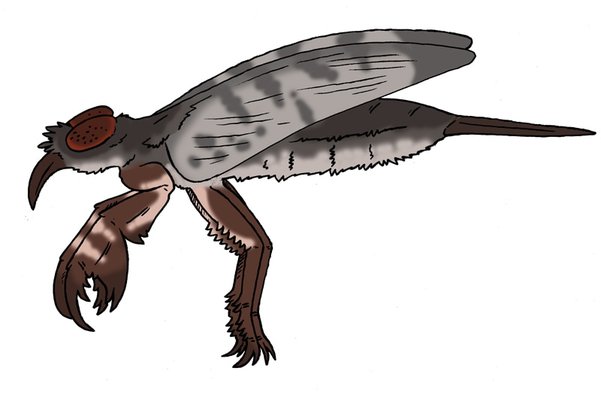 Surf hawkers (genus Pelagopterus) are the largest and most ubiquitous kind of Hawker. These large insects can have wingspans of up to 60 centimetres, and feed entirely on the wing, snatching marine invertebrates from the waves using their large clawed forelimbs. Prey is sucked dry with their large stabbing mouthparts, but large chunks may be clutched in the rear limbs for later consumption. Surf Hawkers spend almost all of their time flying over the ocean in search of prey, much like seabirds once did, but in the dry season they come ashore in droves to form the infamous “maggot rookeries”. Here, pairs mate, eventually rearing a clutch of up to 10 pearl-sized eggs in mud nests built on the ground; breeding colonies consist of as many as 500 nests. The female will fan the maggots with her wings to keep them cool, and the male will bring back chunks of food. When the maggots reach about the size of a middle finger, they are taken to the undergrowth, where they will live as independent predators and scavengers until they pupate into adults. Lifespan ranges from 5 to 10 years. 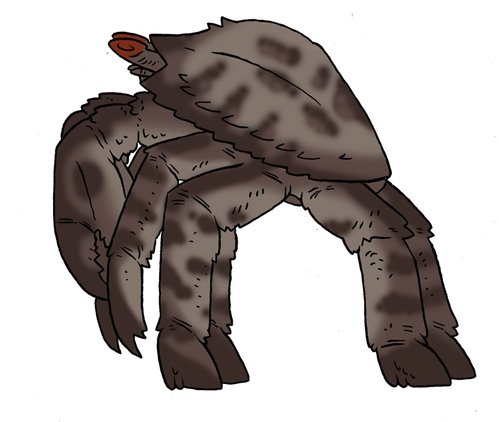 Most island chains in the tropics and some way beyond are habitat for the largest and most ferocious landcrab, the landlubber (Tyrannocancer terrestris). Landlubbers have a leg span of up to 1.2 meters, but their upright stance hides this expanse most of the time. They are very adept at moving about on land, and stand relatively upright upon 2 large pairs of legs that are entirely for walking. One small pair are kept internally to aid cleaning the lungs and the large pair at the front are large and hooked to aid in grappling prey. The front claws are large and powerful, being the primary killing weapon. These huge powerful crabs can overpower most other creatures that inhabit the islands, but also do a significant amount of scavenging on tide-borne carrion. Maggots of large hawkers are a favourite food, but large seedless and small gnathotheres are often taken too. Pairs move in droves to the surf in the breeding season in order to spawn and set their eggs adrift, which will come ashore as small adults about a year later. 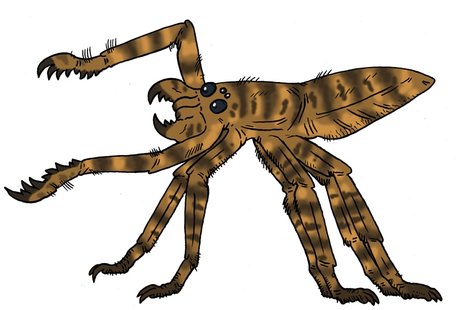 Another common land predator, particular to a few equatorial island chains are members of the genus Deinoarachne, the tigrantulas. These large spiders are swift, powerful predators, the biggest species reaching a size similar to the larger tarantulas of today. A good deal more energetic than tarantulas were,  they have a high-standing posture and can run extremely quickly in pursuit of prey. Prey is grappled and held down with the large clawed forelimbs, and the powerful sharp-tipped pedipalps inject powerful venom. The venom delivery is by the large clawed pedipalps as opposed to the fangs, which now simply serve to facilitate eating and drinking. Exoskeletons of these spiders are more rigid than with typical spiders, in order to anchor large muscles which facilitate their speed and power as predators. Respiration is somewhat more efficient than their ancestors; the book lungs are significantly more folded and enriched with blood. Females lay a clutch of 15 or so large eggs in the wet season, which hatch into spiderlings that can fend for themselves.