In the open oceans, plankton forms the basis for an ecology of plankton-eaters and predators. Predators must be able to swim for marathon distances in search and pursuit of food, and large planktonivores constantly sift and filter the water.
​
Sea-blimps are some of the largest animals inhabiting Panthalassa Nova. These huge invertebrates can reach up to 19 meters long, with mouths than can extend to a gape of 2 meters. They are in fact huge descendants of ctenophore jellies, during the course of their evolution, their flesh as become denser and tougher, and their huge bulk is supported by hardened internal struts that are arranged in a lattice pattern. Sea blimps inhale vast quantities of sea water and pass them though their gullets, which are densely lined with mucous-covered bristles, thus catching large quantities of the zooplankton on which they feed, which often includes comets, clambirds and wrill. The filtered water is then shunted out the rear orifice, which can serve to propel the animal forward. Sea blimps also have large undulating fins along their sides, by which they propel themselves at cruising speed. They no longer use their cilia to swim, these filaments instead serve to allow the animal to sense water currents and maintain their position in the water.

​The lozenge sea-blimp (Ctenodrigibilis medius) is a deeper-bodied member of the group that reaches 12 meters long. Travelling in shoals of up to 8, they constantly search for swarms of the zooplankton which forms their food. Their preferred food tends to be comets.
​

​The cigar sea-blimp (Longodirigibilis gigantea) is the largest of the group, reaching up to 18 meters, 19 in record individuals. These particular blimps are mostly solitary outside of the breeding season, and migrate constantly in search of the vast swarms of wrill and comets on which they mostly feed.
​
Giant Pelagic Barnacles are descended from rather typical barnacles of our time, but are very large, some individuals as large as a backpack. They are solitary, using a large spongy float to drift passively over the open ocean, snagging food in their tentacle-like cirri. In this way they do not resemble most conventional barnacles, and almost look like jellyfish or siphonophores. 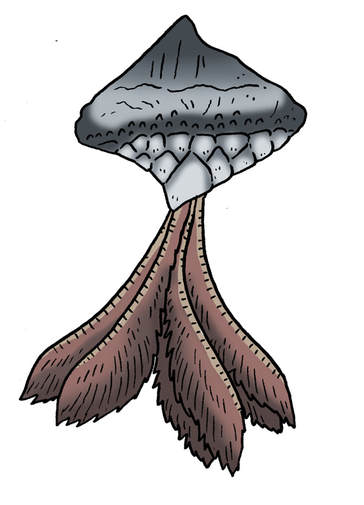 Sweep-raft Barnacles (Pellicocirra gigas) are the largest of the Giant Pelagic Barnacles, their float can often be 60 centimetres wide. As with their relatives, it floats passively with its cirri suspended below it, in order to snag its food. Sweep-rafts feed by catching various plankton on its large, hairy, mucous covered cirri, which are regularly retracted in order to consume the harvest. 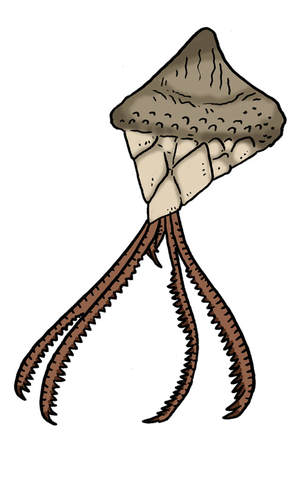 Windsnare Barnacles (Venatocirra navigans) are slightly more active predators than their relatives, though they are smaller at only 40 centimetres across. They use their long, powerfully spined cirri to snag small actively swimming animals, particularly those that have soft bodies. Once one feeding arm snags they prey, the others all curl around it, crushing and impaling it so that it may be retracted into the body and eaten. 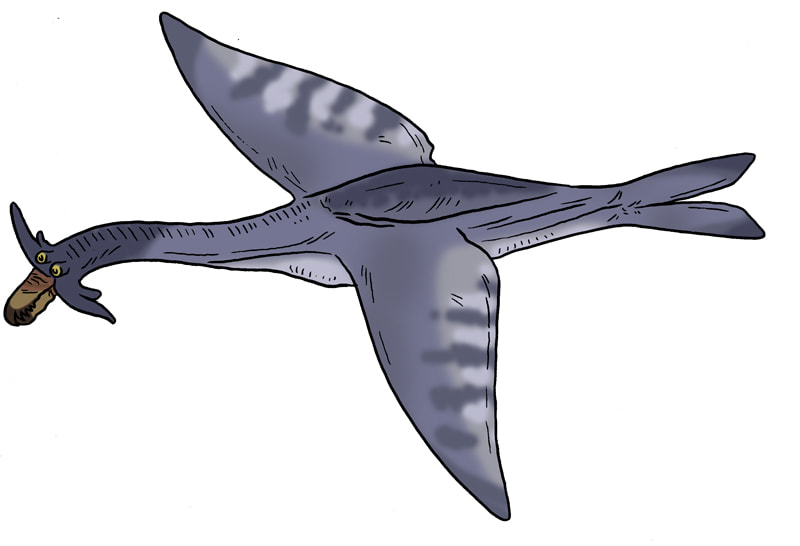 The Crane-Necked Phantom (Elasmolimax ferox) is a very large pelagic predator, a mollusc distantly related to the slugfish, with which it shares a common ancestor. At 12 meters long and 10 meters in fin-span, it is an open water predator that feeds entirely on shoals of smaller invertebrates, like Broomlegs and Squidjets. This is the reason for its elongate, neck-like fore body, which can dart forward in a flash, to snag prey in its large horny mouthparts. Breeding is sporadic, as any two Phantoms may only occasionally meet in the vast expanses of the ocean, though conveniently they are hermaphrodites.
Squidjets are common open-water predators of the open ocean. Descended from calamari, they have taken jet-propulsion to the next level. The body has 2 pairs of openings, fore and aft which have evolved from the siphon; these allow the animal to constantly shunt water through in order to propel the animal at speed, like a jet engine. Large flapping side fins enable the animal to steer and manoeuvre. The arms of its ancestor have evolved into a snapping mouth lined with keratinous teeth; some species are able to extend their mouth forward quickly to snatch prey. Other species also possess hooked arms which they use to grab prey. Squidjets breed in large numbers in the summer, internal fertilisation in this case has evolved into internal brooding, where the egg mass is kept glued inside the body wall, constantly aerated by the passing of water through the siphon. As with modern calamari, the mothers die en masse after their young have hatched. 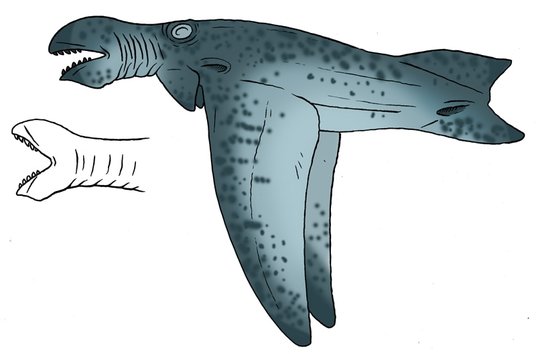 Springmouth squidjets (genus Prolongognathoteuthis) are fairly common in the open ocean, reaching lengths of 30 centimetres, and swimming in loose shoals of up to 50. Their mouthparts are mounted on the end of a flexible tube that can spring forward some distance, to capture prey such as smaller cephalopods, fwirms and other free-swimming invertebrates.
​ 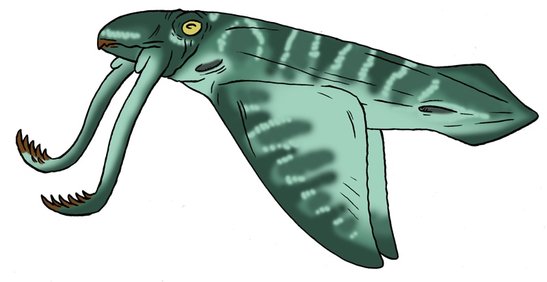 Armed squidjets (genus Brachiopterus) are smaller members of the group that average at 18 to 20 centimetres long. They are generally found in small shoals of no more than 20. They snatch small swimming prey with their long arms, grappling it and passing it to the mouth. Most squidjets are able to communicate with each other using colour and pattern changes, as with their ancestors, and this kind is particularly adept at that, having large reflective patches which can be flashed on and off.
​

Hovering squidjets (Nasutosepia sp) are fairly large members of the group, reaching up to 70 centimeters long. They spend most of their time hovering some distance below the surface, where the water starts to get dimmer, scanning above for prey. When prey is spotted they rapidly shoot upwards with their jet propulsion, and snatch their prey by rapidly unfurling their mouth, which is at the end of a long retractable proboscis. 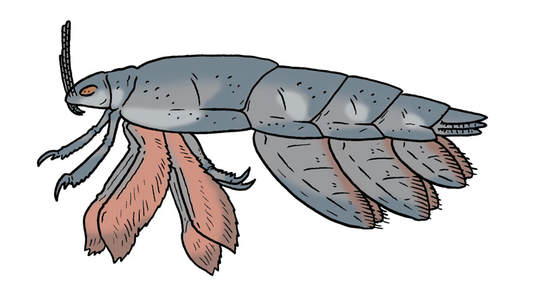 Broomleg (Pellicobrachius pelagica) are another advanced kind of Amphipod, related to the Red Baron and the Blue Meanie. Reaching about 25 centimetres long, they are pelagic filter feeders, plying the open waters in large shoals. They feed entirely by snagging various small plankton upon their bristly forelegs, which are lined with sticky mucus. As they swim, the arms are retracted occasionally so the plankton can be cleaned off and eaten. These crustaceans are regularly preyed upon by larger pelagic animals.
Trapmaws are the apex predators of Panthalassa Nova. Having a large wicked mouths which open sideways, armed with very strong horny teeth, it may not be immediately obvious that their ancestors were lampreys. The simple mouth of the lamprey has convergently come to resemble a strong snapping jaw, albeit a cartilaginous sideways-opening one. Large teeth are formed from a calcareous core which is coated in strong layers of keratin, and the jaws are a formidable weapon made of reinforced cartilage. Shark-like trapmaws of the open ocean are apex predators which prey on other free-swimming animals such as squidjets, crustaceans, and each other. The notochord of these animals has evolved more towards resembling a true backbone, being composed of thick cartilage.
​

The Tzar trapmaw (Regignatha regalis) is the largest species of trapmaw, reaching 9 meters long. They are solitary, but still able to prey on almost any creature they want, including squidjets, crustaceans, other smaller trapmaws and even sea-blimps. This species is a powerful swimmer, and can cover many kilometres in a single day. Its sense of smell and vision is very keen, and they can track prey over a long distance. 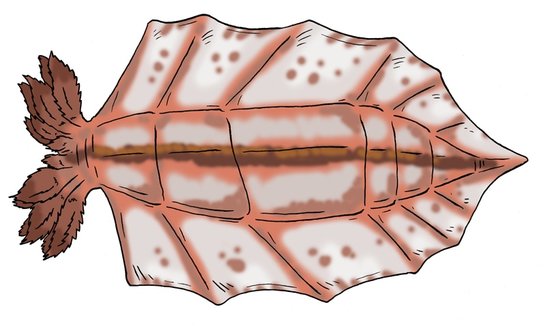 Webbers (Holothuropterus sp) are meter-long pelagic sea-cucumbers which swim lazily along using powerful strokes of the webbed membranes along their sides. They use filament-covered feeding tentacles to trap and sweep plankton into its mouth. When threatened by a predator, it will violently eject its digestive lining in sticky threads, all over its attacker, just as modern sea cucumbers do. 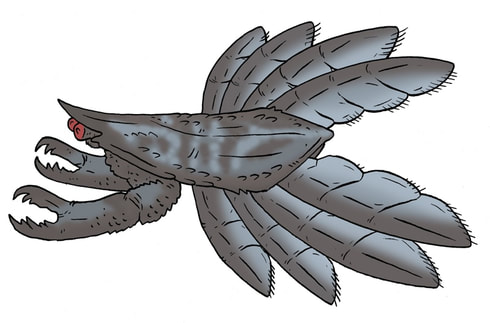 Paddlecrabs (genus Cancrionatans) are mid-sized predators of the open ocean that also range into shallower waters. They have evolved from typical shore-crabs, into creatures which swim constantly with their paddle-like jointed legs. Front-mounted eyes allow them to spot prey keenly, and they mostly prey on small slugfish and young squidjets, which they snatch with their large pincers. The larger species of this genus reach 35 centimeters long.
​

Phantom slugfish (Limacophantasma sp) are fair-sized predatory slugfish which are common in the open ocean, they reach up to 50 centimeters long. Mostly transparent, they rely on this camouflage to pursue prey unnoticed, though they can put on a decent turn of speed. They mainly feed on small squidjets, larger fwirms and other free-swimming invertebrates, even each other.

The asshaler (Branchioculo pelagicus) is the last great member of the sauropsida (reptiles), descended from side-necked turtles that took to the sea many millions of years prior. Reaching 6 meters long, this giant marine reptile can swim great distances in search of its food, which mainly consists of jellyfish and other soft-bodied invertebrates. Asshalers are able to dive great depths for their food, and spend a great deal of their time submerged. This is because their anus and colon contain a large folded area of exposed blood-vessels which allow it to respire for great lengths of time underwater. After mating, a single large egg is incubated internally, as these animals are ovoviparous in a similar way to the sea snakes of today. This species has evolved a warm-blooded metabolism based on a specialized circulatory-system, much like the tuna or great white shark of our era.