The tiny phytoplankton of this age is mainly composed of specialized cyanobacteria and certain other photosynthesizing micro-organisms; this in turn is preyed upon by many tiny kinds of zooplankton, mainly composed of the larvae of various marine invertebrates. There are also larger members of the plankton, visible to the naked eye, that actively seek out other planktonic organisms as food.
​
​Comets are a very common kind of zooplankton, ranging in size from less than half a centimetre to as long as your pinkie finger, they row through the surface waters in large swarms. These creatures appear almost totally alien, but their earthly origin is fascinating, they are neotenous starfish. They maintain a body shape which has evolved from that of the swimming larvae of starfish, but these creatures reproduce and spend their entire life-cycle in this form. Comets have mouths ringed with stiff filaments that sweep the water for various microplankton, they have fringes of filaments on their swimming appendages that aid them in propulsion.
​

Greater comets (genus Pelagaster), are among the bigger kinds of comet, reaching about 5 centimeters long. They form large swarms of many thousands, which drift and swim about in the water column, snatching smaller planktonic organisms. As with all comets, they have eyespots which allow them to navigate, evade and tell night from day. 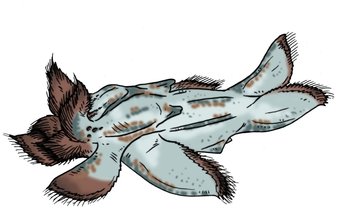 Moustached comets (genus Mustachiaster) are smaller comets that only reach about half a centimetre long. These tiny creatures drift in huge swarms of many millions, paddling furiously to navigate against the current, or towards sources of food. They feed mainly on smaller plankton, which they catch on their mucus-covered bristly mouthparts. 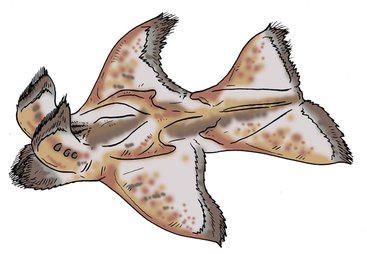 Winged Comets (genus Pteroaster) are mid-sized members of the group reaching about 1.5 centimetres long. Being more active swimmers than other comets, they have a streamlined shape and large appendages. Swimming about in large swarms of up to several million, they constantly catch smaller planktonic organisms with their bristly mouthparts. When comets spawn, they release their gametes en masse, which hatch into tinier, less developed versions of themselves, in fact these minute juveniles are common prey of adult comets.

Clambirds are a kind of noticeable zooplankton. These bivalves have deviated from the typical form of their ancestors. Their shells form a pair of streamlined flappers or wings that propel them though the water much like a bird would through the air, the tapered head, mouth and body are attached underneath. They filter the water much as a typical clam or mussel does, taking in water through its front orifice, and expelling it again after extracting food. 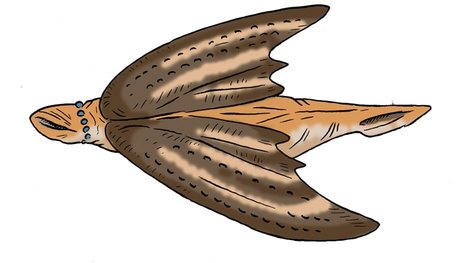 ​The blue-eyed clambird (Pterovalvia hyacintoluscus) is a fairly typical member of the group, with a width of only 4 centimetres across the shells. These clambirds swim about in loose shoals of up to 700 in the open ocean, constantly filtering the water for plankton as they go. They can put on a turn of speed by rapidly flapping their bivalved shells, but they are commonly preyed upon by larger filter feeders and predatory members of the zooplankton.

Fwirms are another larger member of the zooplankton, these are descendants of polycheate worms that have convergently evolved a fish-like shape. Some kinds are only a centimetre or two long, and feed on smaller kinds of plankton selectively, whilst the larger forms can be as long as your middle finger, and use mouths full of bristles to sweep up plankton. Some forms are voracious tiny hunters with raptorial mouthparts, which prey on other fwirms, comets and clambirds.

The anchovy fwirm (Vermichthys anchovetta) is one of the bigger planktonic fwirms, reaching about 10 centimetres long. They swim in large shoals of up to many thousand, using their facial bristles to sweep smaller plankton into their mouths. These shoaling fwirms form the basis of the diets of many other open ocean creatures, much as baitfish did in our time.

Wrill (Vermicaris minutus) are tiny fwirms no more than 2 centimeters long, which feed selectively on smaller plankton in the open ocean. Their shoals often number in the many millions of individuals, and larger filter-feeding creatures such as sea-blimps rely on these shoals as a main source of food.

Nipper fwirms (Gnathovermicthys rapator) are tiny voracious predators that live in small loose shoals. Reaching about 7 centimeters long, they prey on many other types of larger plankton, including clambirds, fwirms and comets. They possess large raptorial mouthparts that allow them to catch prey even larger than themselves.