​In the shallow tropical waters around the equator, extending almost past the subtropics, are large barrier reefs. These reefs are not of a kind that would be recognisable to man, though. Coral is long extinct, and the organisms that build reefs in this time are of a more ancient and archetypal kind. Various kinds of reef building organisms generally live in patchwork fashion here, building around and on top of one-another. These structures form a base on which grow various encrusting organisms, barnacles, bivalves, tunicates, and crawling creatures such as sea snails. 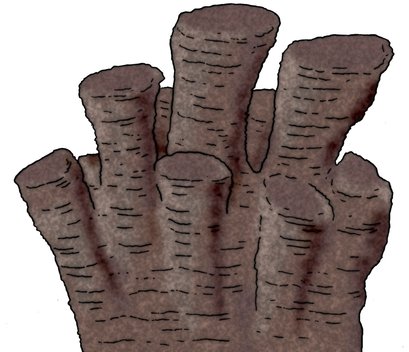 Huge mounds of colonial sea sponges are another important reef builder; these large colonies resemble uneven tall hills and stunted columns, made as sponges grow clustered together and on top of each-other, over successive generations. Such aggregations generally grow in the spaces between other reef-building aggregations.
​ 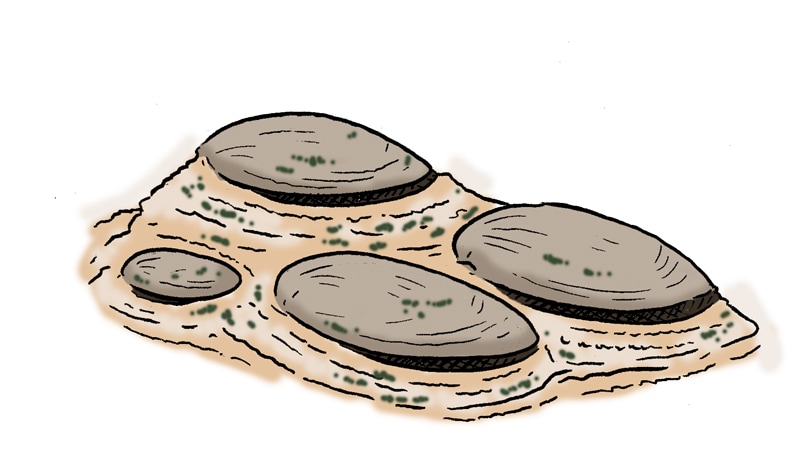 Bivalves also form an important part of the reef building community. Cementing-clams are rudist-like large bivalves that form shelves of cement-like calcareous secretions on their lower edge, which over generations can form large outcroppings. Some small sea creatures take refuge inside these clams.
​
Slugfish are one of the most prominent groups inhabiting Panthalassa Nova, they exist in a variety of habitats, but are most ubiquitous on the reefs. Despite vaguely resembling fish, slugfish are actually descended from sea-snails that lost their shells and muscular ”foot” completely, becoming free swimming creatures of the water column. They propel themselves with pectoral-fin-like flippers and muscular tail fins, their large gill arrays are internal with water being constantly pumped over them. The projecting snout and muscular mouth of a slugfish conceal a large array of horny teeth on the radula that rasp and chew, and in predatory species the front ones project to aid in catching prey.
​

​Reef dwelling slugfish come in many kinds, some of the most beautiful are the ones that nibble and chew on encrusting organisms, using their muscular, tooth-lined radulas. The yellow nibbler (Limaconatans jaune) is a fairly common one, reaching 20 centimeters long. It feeds mostly on algal films, brown algae and encrusting colonies of tunicates.
​

​Candy slugfish (Limacobella striata) feed mostly on shelled encrusting organisms like bivalves and barnacles, but they will also nibble algae. Reaching 18 centimeters long, they form shoals of up to 25, which move methodically across the reef in search of food.
​

Harlequin slugfish (Icthyolimax agilis) are skittish creatures reaching up to 30 centimeters long. This species feeds mainly on growths of brown algae and algal films that form on rocks and sponges. They form small shoals of up to 10, which are in fact harems presided over by a large male.
​ 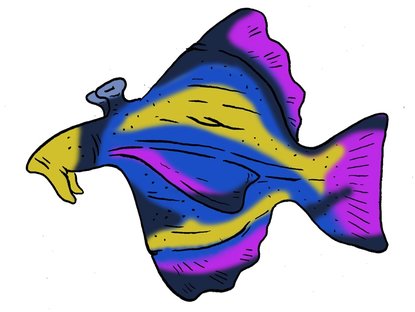 ​Angel-slugs (genus Algelimax) are one of the most striking slugfish, having deep semi-triangular bodies and beautiful colours. They feed mainly on encrusting animals such as tunicates and barnacles, as well as small grazing sea snails. Angel-slugs form shoals of up to 30, which seem to glide over the reef outcroppings as they search for food.
​

​Blue-spotted codslug (Limacogadus rapax) are large predatory slugfish which patrol the reefs in search of crustaceans and smaller slugfish to eat. Reaching a meter long, and being a powerful swimmer, they are able to chase down their prey with ease. As with most predatory slugfish, the foremost radula teeth project forward to form a prey-seizing organ.

The darting arrays of colourful slugfish, so common on the tropical reefs, have a relation that is their symbiont, the Cleaner Slug (Limacosanitus nanus). Small and distinctly coloured, this agile slugfish serves a purpose almost identical to the cleaner wrasse of the long gone coral reefs of human times. It feeds entirely by picking parasites and bits of dead skin off the bodies of other kinds of slugfish, which will dutifully wait in place as the Cleaner Slug performs this service. This mollusc will usually show its readiness to clean by making a certain undulating motion, at which stage its clients will come up and await a grooming session. They reach a maximum length of about 12 centimetres. 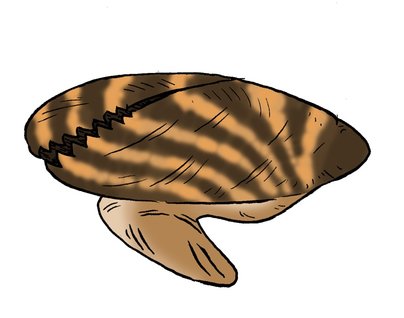 Crags and crevices amongst the false stromatolites and sponges can harbour ambush predators such as the pouncing clam (Bivalviraptor sp). Pouncing clams, measuring up to 20 centimetres long, are unusual among clams in that they have evolved to be active predators of other invertebrates. The muscular body of the clam usually protrudes from the rear, able to launch the animal forward to seize prey with the large serrated, jaw-like bivalved shell.
​ 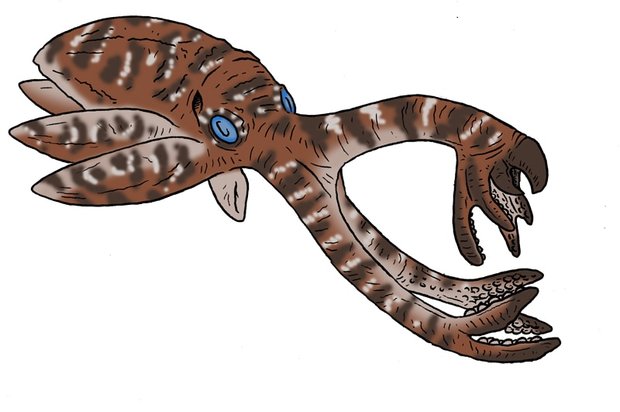 The closest Panthalassa Nova has to people are the inimitable Octosapiens (Octanthropoides mimeticus). These 1.5 meter cephalopods are directly descended from reef dwelling octopi, but have changed dramatically since our day. Their beak-like mouths are mounted on the end of a long proboscis that bears 2 pairs of arms, 2 much longer arms sprout from the face, ending in opposable, suckered digits. Also, 2 pairs of large side fins, which developed from the rest of the arms, serve to aid in steering, and also communication. Octosapiens communicate with an advanced language of colour and pattern, flashing almost rune-like shapes across their fins, arms and bodies. Social interaction is important, as they live in large “families” of up to 20. Their intelligence rivals modern parrots and ravens, and they are able to devise tools out of shells and other debris, in order to excavate their communal burrows, or to extricate hiding prey from crevices. The main form of propulsion is still their large siphon, which can send them in any direction with a jet of water. Octosapiens also display an incipient material culture, chewing ornamental patterns and shapes into pieces of sponge or shell, with which they decorate the entrances to their homes. Their main prey consists of various smaller marine invertebrate, usually caught cooperatively from ambush. Unlike modern octopi, octosapiens can life for as long as 30 years, producing multiple generations of offspring.

Many rocky crevices, as well as crevices in the false-stromatolites and sponges of the tropical reefs, can be found to contain dainty little One-arms (Uniteuthis vermiformis), no more than 25 centimetres long. These remarkable cephalopods have co-opted some of their arms to become large spiked mouthparts for seizing prey, and small rear paddles to aid in swimming, while some have been lost completely. One large, long arm retains its original function, and is almost like a single long, prehensile tail with which the One-arm fixes itself in its hole, or will occasionally undulate like an eel when it has to swim. They are ambush predators, and will wait at the lip of a hole or crevice, only to strike powerfully at a passing prey item, much like a moray eel would have.
​

One of the most active predators of the reef is the Fin-mantis (genus Stomatonatans), the largest of this genus reach about a meter long. Fin mantises are descended from mantis shrimps, and have adapted to be active, fast swimmers with large pairs of pleopods and a muscular tail. They constantly hawk over the reefs, searching for opportunities to snatch prey with their wicked extensible claws. Prey is usually chased down with great speed, with little attempt at an ambush.
​ 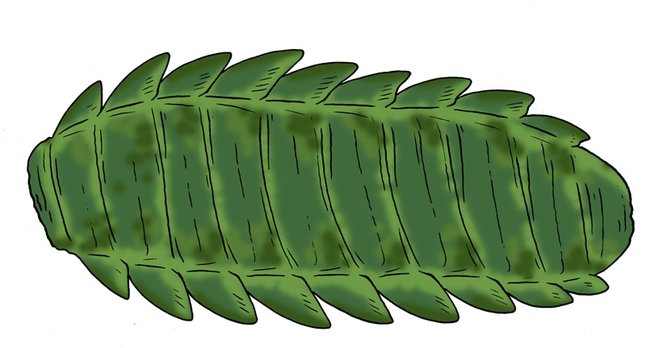 Bare sandy expanses around the edges of reefs, particularly in the shallows, will inevitably be carpeted with greenmats (Phytothuria compressiformis). The greenmat is a large sea-cucumber (about 1 meter long and 40 centimetres wide) that lives in a very unusual way, relying on internal colonies of algae to generate its food via photosynthesis. Juvenile greenmats feed actively on algal films that form on the sea floor, when it accumulates enough algal cells in its body; it metamorphoses slowly into its adult form. Adult greenmats actively cultivate these unicellular algae inside the body, providing them with access to sunlight and fertilising them with waste fluids via a specialized circulatory system. Older greenmats will be completely bright green, filled with algae that produce nutrients for it so constantly, that the mouth becomes atrophied and healed over.

The starpus (Tentalculaster medius) is a member of an unusual group particular to this time period, the asterotheres. Asterotheres are descended from starfish, but have come to have a strange resemblance to bilateral symmetry. Its main body or tail is made up of 2 arms which have fused together, lined with paddle-like tube-feet for swimming, as well as walking tube feet. The front of the animal has another large pair of arms which serve as grasping organs to capture prey, each covered with long tentacular tube feet. Between these two arms is a “head” arm which bears 2 large, well-developed eyespots, the mouth is in the centre all of the arms, underneath the animal. Starpus are fairly typical asterotheres, being up to 70 centimetres long, this species will usually wait in ambush under an outcropping, emerging to chase and capture invertebrate prey such as slugfish.
​ 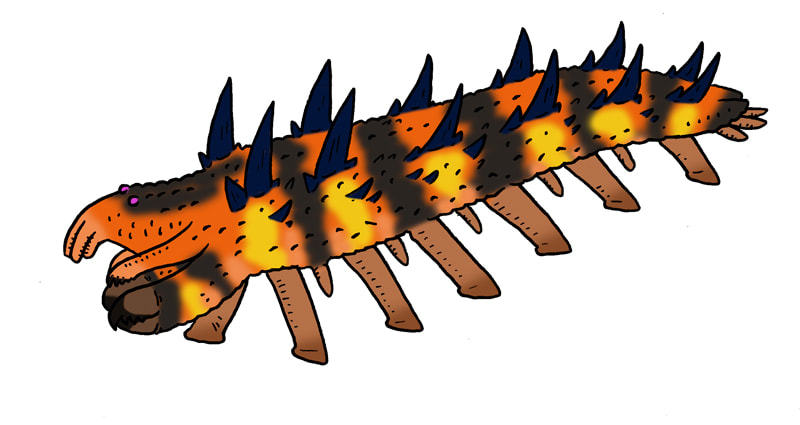 Thorny Asterotheres (Spinoreptus toxica) are large asterotheres (about 1.5 meters long) which are common in the tropical reefs of Panthalassa nova. Slow moving bottom dwellers, they are well protected by large rows of spines running down the body. They feed mostly by overpowering other bottom-dwelling invertebrates that are too slow to get away, usually killing the prey with their large, pincer-bearing fore-arms. It has bright warning patterns of orange, yellow and blackish colours, which readily advertise that it is not only poisonous to eat, but that it spines bear a painful venom. 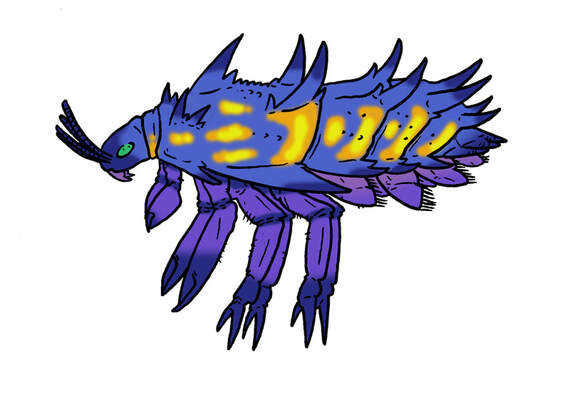 Blue Meanies (Lennoncaris cereuleanus) are large Amphipods related to the Red Baron of the deep sea. These fist-sized crustaceans are fairly common on the tropical reefs, and feed mainly by catching invertebrates that are smaller and slower than themselves. They will amble and crawl over large growths of sponge or false-stromatolite, in search of prey hiding in holes and crevices. Their bright blue colour indicates that this animal is bad tasting and mildly poisonous, this coupled with its spiny carapace means that it is rarely if ever preyed upon as an adult.